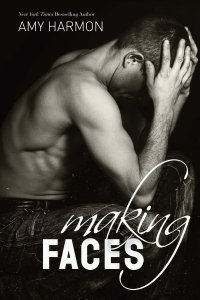 Now, not to seem all cynical again (ahem), but a goodly proportion of New Adult contemporary romances can be high on angst and shagging, and a little low on emotional content and subtlety. So when I embark upon reading one, I’m usually primed to expect romantic hand-wringing and predicable levels of physical contact. However, seek thou alternative reading material if that is what you’re looking for from Amy Harmon’s relatively chaste but certainly absorbing Making Faces.

The story is one thematically reminiscent of a nineties teen movie, or a Barbra Streisand vanity project, or indeed that old classic Beauty and the (uhh uhh) Beast. (Sorry, I always hear the Disney song when I think of that title). But Making Faces has something of a twist. It’s Beauty and the Beast that flips into Beast and the Beauty. Either way, the message – albeit a rather cliché one – is that it’s what’s inside that really counts. Fern Taylor has been in love with Greek God-like high school wrestling star Ambrose Young for as long as she can remember, but has to make do with writing and reading her romance novels seeing as he doesn’t know she exists. A tiny, gawky redhead with glasses and braces, she instead spends time hanging with her cousin and best friend Bailey, who is wheelchair bound due to a degenerative muscle disease. But when the Two Towers are hit, Ambrose feels honour-bound to enlist, taking his buddies with him. Unfortunately, they all perish when an IED explodes, leaving Ambrose the only survivor, horribly scarred (though only on one side of his face, of course). Fern, having grown up and got rid of the glasses and braces, is now something of a cutie. (As the aforementioned teen movies have shown us, this is all that is required to transform the optically-challenged from ugly to purdy…) Scarred Ambrose and newly-pretty Fern begin to reconnect, and soon romance sweetly blossoms.

However, trite as it may sound on paper, particularly with potential added heart-string tugging due to the 9/11 catalyst, Harmon does manage to bring some genuine emotional involvement, most especially in the form of the character of Bailey. Even though he’s the classic quippy side-kick, even though he’s the character with a disability that everyone can learn from, even though the aforementioned cynic in me could kind of see what was in store for his character – when the moment came it was unexpected, gut-wrenching and edge-of-the-seat tense. I only wish that the central relationship between Fern and Ambrose was just a little more deeply explored – and perhaps I do even mean with a bit more physical contact. But I think it’s more that although Fern changes physically, she has nowhere really to go as a character, and as such she’s a little one-dimensional. Similarly, Ambrose’s war wounds are deep but I never really felt for him in the same way I did for Bailey. Fern and Ambrose together are sweet but their relationship plays out predictably and maybe a touch too safely.

And yet in spite of all this, I found Making Faces a welcome change and a well-written, engrossing read, and a special mention ought to be made for the fact that Harmon has quite successfully written a third-person narrative that jumps between characters’ thoughts and feelings without feeling disjointed. But for a story that suggested the surface isn’t all that matters, I just wished it had delved a tiny tad deeper.

You Gotta Check Out My Blog

Is That the Date?